Next summer, nudists or naturists may be able to bare it all in a designated area of the French capital, Paris. City councillors have approved plans for an experimental nudist area, possibly in one of Paris's parks or in wooded areas on its outskirts.

The Green Party, which proposed the plan, said France was a top destination for naturists, and its capital city should have somewhere for them to go. One centrist councillor, however, called the idea "demented". He said the idea of authorising full-scale nudity in the middle of the capital might be seen as a provocation, especially at a time when feelings were still running high over the 'burkini' issue. 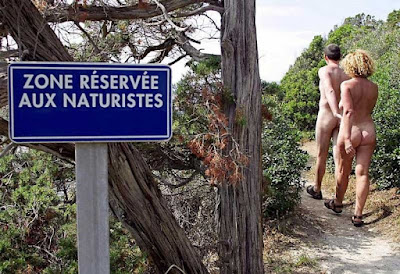 But those who support the move say, in a country with numerous clothes-free beaches and holiday camps, Paris should also be a draw for naturists. "We've got two million nudists in France which is doubled during the summer with visitors," said David Belliard, co-chairman of the ecologist group in the city council.

"For them Paris is the world's premier tourist destination and there's no public place for them to go. We want to try out a recreational area where nudists can freely strip off." Deputy Mayor of Paris Bruno Julliard said he was in favour of the plan, as was Mayor Anne Hidalgo. He said the likeliest site for the naturist zone is in one of Paris's two main woods, the Bois de Boulogne to the west or Bois de Vincennes to the east, "near a lake, in a regulated setting so that there is no threat to public order".
Posted by arbroath at 6:04 am
Email ThisBlogThis!Share to TwitterShare to Facebook