Motorway police received a shock after responding to a report of a woman being assaulted on the M62. Officers pulled a vehicle over on Sunday evening to investigate the incident but found two zombies on their way to an acting job.

A concerned passer-by called 999 after seeing a 'man biting a lady and assaulting her'. When patrols pulled the vehicle over near junction 11 at Birchwood/Warrington, officers were left amused by the couple. 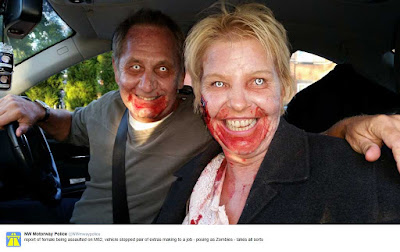 The couple were actors and were wearing zombie make-up for extras they were playing. North West Motorway Police tweeted: "report of female being assaulted on M62, vehicle stopped pair of extras making it to a job - posing as Zombies - takes all sorts."

A Greater Manchester Police spokeswoman said: “We got a call to reports of a man biting a woman on the M62 at junction 11 and was being assaulted. Officers were sent out to search for the vehicle as it is a serious incident. But when they found the car in question, the saw they were covered in fake blood. Thankfully the man and woman were extras on their way to a job and it was a funny ending really.”
Posted by arbroath at 6:00 am
Email ThisBlogThis!Share to TwitterShare to Facebook