Man recovering after being bitten by decapitated rattlesnake

A fire engineer from Spring Hill, Tennessee, needed rescuing after a venomous snake bit him on the finger during a hiking trip in Columbia over the weekend. Kyle Watson was with his wife and two kids at Cheeks Blend Bluff View Trail on Sunday. His wife stepped over what was believed to be a Timber rattlesnake, one of four venomous snakes in Tennessee. The family was deep in the woods off the main trail but knew other people would be travelling through the same area and wanted to prevent others from getting hurt. 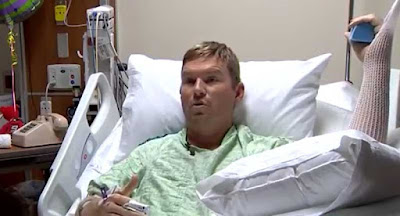 "I picked up a boat oar and severed the snake's head," Watson said. He said the children wanted to see the body so he tried to pick it up. "When I reached to get the body, the severed head turned and struck me," Watson recalled. Watson first thought it was a Copperhead and shook it off. However, he felt a burning pain up his arm a few seconds later and alerted his wife to call 911. "I felt my lips and throat swell," Watson remembered. "I took a few more steps and collapsed and struck my head on a rock." He eventually regained consciousness but knew it would be tricky for medics to arrive since he was about a mile deep into the woods.

He was carried out of the rough terrain before being flown to Vanderbilt University Medical Center. "Time is of the essence when it comes to rattlesnakes, so that was my biggest worry," Spring Hill Fire Chief Terry Hood said. Watson was first listed as critical but stable condition early on Monday morning. His arm remained on a sling to help keep the venom from spreading. Despite what happened, he's thankful for the emergency responders from Maury County including his department for being there. Watson has been an employee in Spring Hill for five years.

The Tennessee Wildlife Resources Agency said between 8,000 to 10,000 snakebites are reported annually in the country. Only 12 to 15 deaths occur each year. Snake experts urge you to seek medical attention immediately if any snake bites you. Remain calm to keep your heart rate reduced and prevent the venom from pumping so fast throughout the body. TWRA officials suggest not to cut or suck the venom out. If possible, keep where the location of the bite by or above the heart. Symptoms are typically an allergic reaction and anaphylaxis.
Posted by arbroath at 6:07 am
Email ThisBlogThis!Share to TwitterShare to Facebook

Next time just leave the snake alone. Why does everybody have to kill them?

I'm with lukus - I feel like this guy got what he deserved, in a way!