Pheasant helps farmer to round up his sheep

For the past 18 months, a game cock pheasant has been helping a farmer round up his sheep. The unnamed bird appears several times a day while Chris Purdham is doing the rounds on his quad-bike checking on his fell sheep at his farm in Gamblesby, Cunbria.

“He’s there first thing in the morning, and last thing at night, and even when I go down at times during the day to check on the sheep,” said 33-year-old Chris. “He just appears when he hears my quad-bike.” Chris says the bird first appeared during his 2015 lambing season. 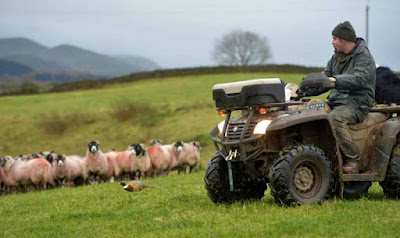 “He first started following me around the fields and down the lonning. Then one day he just started to round the sheep up. I couldn’t believe what I was seeing at first, but I have got used to him now. He even waits for a couple of seconds to make sure all the stragglers are through,” added Chris. “He’s not even afraid of my sheepdog. 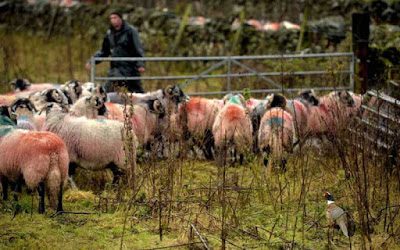 “They seem to have got used to each other, and the pheasant is definitely cock of the walk. He just goes where the sheep are. After I’ve finished checking the sheep, we both go our own way to get our breakfast,” he added. He said the bird helps him round up a flock consisting of about 270 sheep. “They are our fell ewes wintering near Glassonby, and are checked every day,” he added.
Posted by arbroath at 6:00 am
Email ThisBlogThis!Share to TwitterShare to Facebook

I'm more interested in why his sheep are pink.

Recommend you to see the list of the website blocker apps if you find it difficult to concentrate while working.

Our buy custom research paper services are very affordable as we provide you with work that is at a golden equilibrium, try our buy research paper online services today.

we are impressed by the details that you have on your site
There’s certainly a great deal to know about this topic.

we are impressed by the details that you have on your site
There’s certainly a great deal to know about this topic.

The application that included in the Mircosoft office is a word, powerpoint, Excel, one drive, OneNote, Outlook, Access, etc. Is there any problem regarding this application or have any queries related to this then you can visit our official website.

how to get blood out of clothes said...

Your blog is knowledgeable, thank you for sharing it with us.

Instagram is one of the biggest social media platforms. An Instagram stalker can create big trouble. It is important to know every Insta stalker who is visiting your profile or story. You have read my post about how to check who viewed my Instagram profile/account.

A transfer price is a price charged between related parties in an intercompany transaction. The term "transfer pricing" is generally used in relation to multinational enterprises (MNEs) with multiple subsidiaries or divisions that can easily transfer or intangible assets internally.

This is so amazing. Pheasant helping farmers to gather sheeps. FSTN LCD display also have pheasant in their workspace.

Pheasants are helpful animals to farmers because they help them round up their sheep. The birds fly around, looking for lost sheep and calling out to them so that the farmer can find them easier. Law coursework writing service UK also helps students to build their thought in historical law and economics studies to prevent their articles effectively.

I am glad to be able to see your article,
and I hope that you will continue to upload a lot of good articles. Please visit once you have time.
My site is 토토

You’ve got knowlege about everything that’s why I love this site! Very useful and helpful.. Try browsing my website to gather some information.. Will appreciated it a lot! 스포츠토토

This is fascinating news that has a wealth of knowledge that may be applied to daily natural living. In truth, I'm seeking for that kind of knowledge to assist with producing a marketing essay writing help; as a writer, I aid students with their projects.

good ideas...I things are mention in good manners and this is really interesting and make it more attractive and perfect. Now it's time to avail HALFCASTE CREAM SET for more information.

Your article is so inspiring! I wish I could write like you. Now all I can do is use an essay writing service to do all the writing papers for me. Last month I use Place4Papers. This company write my discussion board post and it was so unique and well-written, so I got a good review from my tutor. Contact me to get details.