Police hunt for man dressed as gorilla who burst into apartment

Police in Rexburg, Idaho, are trying to find a man who dressed up as a gorilla and burst into a Brigham Young University student apartment on Friday night.

Officers were called to Avonlea Apartments after the female occupants reported the incident. “They were sitting at home when the gorilla ran through the front door and into the other room,” Rexburg Police Capt. Randy Lewis said. 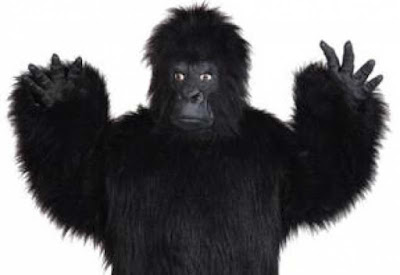 “He knocked over a few things before leaving the apartment.” Lewis said the students called the police because they were scared and investigators learned a similar incident happened at a men’s student apartment last week.

“We don’t care if it’s a prank or if he was just monkeying around. We’re taking this serious and the perpetrator could be charged with unlawful entry,” Lewis said. “You have a big ape tear into your front room out of the blue – you’d be scared too.”
Posted by arbroath at 6:06 am
Email ThisBlogThis!Share to TwitterShare to Facebook

We are the best writing company providing write my Cheap Dissertation Writing Services for all subject areas and education level. Our writers work under strict guidelines in day and night shifts to ensure that every Essay Writing Service is completed and submitted before the provided deadline.

Ensuring our clients get 100% Already Written Essay Writing Services is one of the strategies we have adopted in becoming the best provider of do Literature Review Service in the industry.

Thank you very much for providing the important information for me. Kindly post more and more such blog.I am working as an academic consultant in USA and offer essay writing service to college students. go to this site for more details.

I really appreciate you on this article.
Dubai artificial grass