Thousands of pounds worth of damage caused by road sweeper race

A road sweeper race caused thousands of pounds worth of damage in Kendal, Cumbria. An unknown group of people entered a council compound on Sunday evening, removing four mini road sweepers. The sweepers were raced around the yard, with one of them crashing into a stationary van, causing damage to its wing and windscreen. 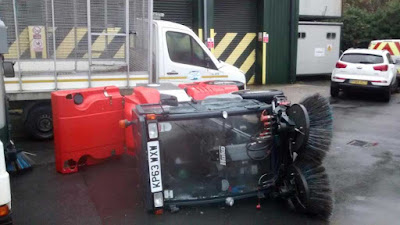 The sweeper was also toppled on to its side, resulting in further damage exceeding £8,000. Simon Rowley, South Lakeland District Council’s Assistant Director of Neighbourhood Services, said: “The break-in was discovered when our operatives turned up for work. The police are conducting an investigation into this incident and we are assisting wherever we can.

“The council has four mini-sweepers, with three used daily on street sweeping duties and one held in reserve in case of breakdowns etc. That means that we have been able to continue to provide our usual service with the three remaining sweepers, although there was a delay in being able to send the sweepers out on Monday to allow police to complete their investigations at the scene. 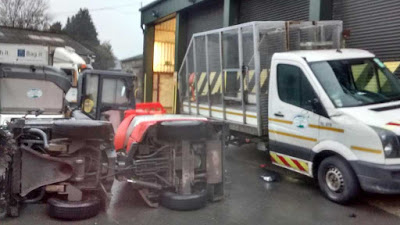 “The sweepers are on contract hire and we have already requested a replacement for the damaged sweeper so that we will have a fourth reserve sweeper available. Another of our vehicles, a pick-up truck used to collect litter bin waste, was also damaged in the incident but we have been able to cover that vehicle’s operations and there has been no impact on services for our residents.’’ Police would like to speak to anyone with information regarding this incident.
Posted by arbroath at 6:00 am
Email ThisBlogThis!Share to TwitterShare to Facebook

Thanks for sharing your useful post to us . We are very happy to read it .Amazing post. I am so impressed.