Since riding to hounds was banned, the Prince of Wales has found a new way to protect his flock of 450 organic sheep from foxes – four South American alpacas.

The llama-like creatures act as bouncers on his farm near Tetbury, in Gloucestershire, bonding with the sheep, ever ready to protect them against predators such as foxes, which used to kill as many as 50 newborn lambs every year.

Unlike sheep, alpacas happily confront foxes, chase them and try to trample or kick them. And while the prince’s staff have not yet found any battered fox bodies in the hedgerows, they haven’t lost any lambs either since the alpacas arrived. 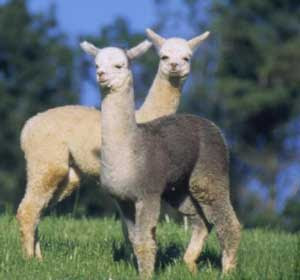 Alpacas, which are related to camels, are domestic animals first bred from wild vicuna in South America. They are edible when young but are reared mainly for their fine wool. They look like a cross between a small llama and a large, long-necked sheep and can grow to 6ft tall.

Charles’s alpacas do not hunt. Instead, they are used as sentries, standing guard over his collection of sheep, which includes some valuable rare breeds. If one spots a fox, they all charge over to administer a group kicking.

Rob Bettinson, former president of the British Alpaca Society said: “If a fox enters the field they will all start walking or running towards it. Alpaca can kick and trample very hard so the fox usually gets the message pretty quickly and clears out.”
Posted by arbroath at 9:05 am
Email ThisBlogThis!Share to TwitterShare to Facebook