The gas that provides millions of schoolchildren with hours of fun and gives stink bombs their revolting smell could soon provide doctors with new treatments for conditions ranging from strokes to chronic arthritis.

Some researchers are even trying to use hydrogen sulphide - the source of rotten eggs' unpleasant odour - to put patients with strokes or serious injuries into a form of suspended animation to help them survive severe traumas. This research is now being backed by the US military, who believe it could help their surgeons cope with injuries suffered by soldiers in battle. 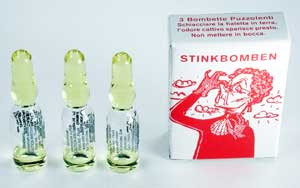 'Hydrogen sulphide is made in very low doses in the body and, far from doing harm, it has become clear that it can do a great deal of good,' said Dr John Wallace, a pharmacologist at the University of Calgary in Canada. 'It is found in the brain and is also thought to control blood pressure. It is quite pervasive, in fact.'

Hydrogen sulphide is corrosive, foul-smelling, flammable and deadly in sufficient concentrations. A single breath can kill. Yet the gas has recently become a buzzword in scientific circles following discoveries that in tiny doses it plays a significant role in influencing some chemical pathways in the body.
Posted by arbroath at 9:09 am
Email ThisBlogThis!Share to TwitterShare to Facebook