A leading clergyman is facing calls for his resignation after a series of outspoken remarks about gay men.

The Rev Peter Mullen, chaplain to the London Stock Exchange, called for homosexuals to be tattooed with warnings about the perils of gay sex in a cigarette-packet-style health warning. 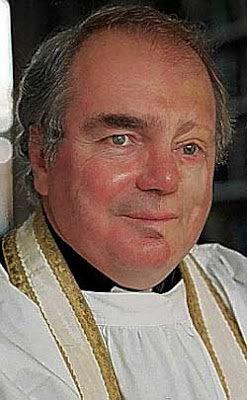 'In addition, the obscene 'gay pride' parades and carnivals should be banned for they give rise to passive corruption, comparable to passive smoking. Young people forced to witness these excrescences are corrupted by them.'

Here's a screenshot of The Reverend Peter Mullen's original post, saved for posterity.

Mr Mullen, who is rector of St Michael's Cornhill and St Sepulchre without Newgate in the City of London and writes a regular column for a regional newspaper, said sex education films should be shown in schools, highlighting sodomy as a 'filthy practice'.

Mr Mullen, 66, has insisted it had all been a joke and he had nothing against gay men.

Reverend Mullen has now removed his blog, but for the time being, it is still available via Google cache.
Posted by arbroath at 9:06 am
Email ThisBlogThis!Share to TwitterShare to Facebook