Anthony Herman understands that you might not appreciate the way he fights City. Hall. He realizes that some people tend to look askance when they see 8-inch-tall letters calling city leaders names not generally popular with the chamber of commerce. But Herman, a car salesman now embroiled in a three-year legal battle with Polk City officials, insists he doesn't have any choice.

"This isn't what I want to be," said the owner of Mighty Good Used Cars, as well as an adjoining lube shop and a car wash. "I don't want to be the crazy person with the crazy sign out front. ... What else am I supposed to do?"

Herman contends Polk City for years has harassed him with zoning violations, tied him up with lawyers and sent squad cars to deliver letters to his Johnston home in a bid to embarrass him. Polk City, for its part, has alleged that Herman ran an illegal salvage operation from 300 Sandpiper Court and routinely dumped vehicle fluids into the city's storm sewers. 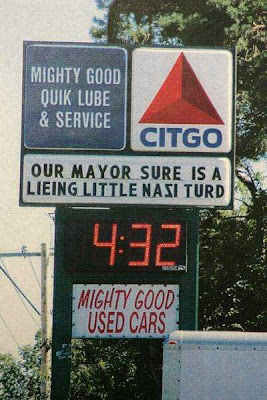 The commentary returned last week, when Herman's sign began telling Polk City residents that "Our mayor and council sure are ass holes."

City leaders say Herman's messages have drawn complaints from some residents - mostly parents who came across them while transporting small, reading-age children - but insist that the city has no plans to try to interfere with his right to free speech.
Posted by arbroath at 10:23 am
Email ThisBlogThis!Share to TwitterShare to Facebook