Teenager jailed for assaulting his mother with a taco

A dispute that began when a Deltona woman unplugged her son's video game ended with the son in jail, accused of shoving his mother and throwing a taco at her.

Dena Moir, 54, told deputy sheriffs she called her 19-year-old son Zachary several times to come downstairs for dinner Tuesday. When he didn't respond, she went upstairs and unplugged his Xbox. She told deputies her son pushed her, called her names and ordered her out of his room.

The woman said she was cleaning the kitchen when her son came down to eat and that she pushed him to the side because he was in her way. At that point, deputies said, the man smacked his mother on the left arm, called her more offensive names and threw his taco in her face. 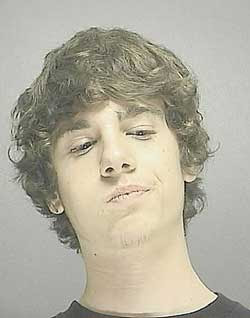 "I don't think he believed I'll call," the woman told a 911 dispatcher when she called the Sheriff's Office. "He's done this plenty of times before and I've never called."

She spent more than half of the eight-minute call talking about her efforts to evict him from the house. "I don't want him living with me," she said. "I can't get him out of the house."

She told the dispatcher she had gone to the courthouse but was told she could not evict him. The dispatcher suggested she return to the courthouse and speak to someone else. The teenager is being held without bail in the Volusia County Branch Jail, charged with domestic violence battery.
Posted by arbroath at 10:18 am
Email ThisBlogThis!Share to TwitterShare to Facebook