An unemployed Salford man has secured a job by standing at the roadside in Manchester advertising for work on a sandwich board. Jason Fruen, 39, took the drastic action after being made redundant five months ago.

The father-of-one spent several hours on two days last week standing at Junction 9 of the M60 near the Trafford Centre in Manchester, before receiving a job offer.

The sandwich board he wore around his neck stated: "Mechanical maintenance engineer seeking employment" and also contained his phone number. 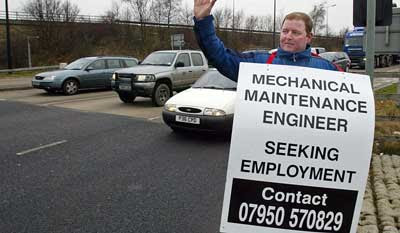 Mr Fruen said: "I've actually had a company offer me a position. I've had to have an interview and they've offered me a position."

He said he has to go and finalise the terms and conditions of his new job on Monday.

He said: "I think we're going to see a lot more people adopting this way of looking for work. I've still got a mortgage to pay, that's why I was out there doing it. I've still got the cost of living and my bills to pay and I needed a job to do it."

There's a news video here.
Posted by arbroath at 9:31 am
Email ThisBlogThis!Share to TwitterShare to Facebook