A class of youngsters at a Church of England primary school were asked by a teacher to write down the rudest words they could think of and then grade them in order of offensiveness. Shocked parents found a string of foul and abusive words in their 10-year-olds’ school books.

The litany of words ranged from variations on the F-word, crude slang for sex acts, female and male genitalia, and racist and derogatory name-calling. The idea was dreamed up by a male teacher, Fred Laband, to help involve youngsters at the Great and Little Shelford Church of England Primary School, near Cambridge, analyse bullying.

The children were encouraged to come up with a list of hurtful, unkind words commonly levelled at victims. They were then asked to categorise the insults into four sections: Really Upsetting, Upsetting, Not Nice and Harmless. 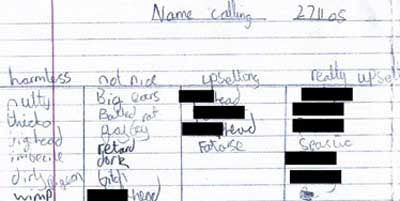 The mother of one child said she was horrified when she looked in her child’s exercise book. She said: “You don’t expect your children to learn this kind of filth at school, particularly one linked to the Church. When my 10-year-old showed me an exercise book with those sorts of words rewarded with a tick from the teacher, I was disgusted.”

Another added: “It seems the whole lesson was spent encouraging the kids to come up with as many nasty swear words as they could. Obviously some of them were more streetwise than others, and from what I understand, an element of competitiveness was encouraged.

”I don’t want to sound prudish but it is a pity there isn’t more emphasis placed on the three R’s in schools these days. Some of the words used were so bad, I’d never heard them before and the whole episode beggars belief.
Posted by arbroath at 9:50 am
Email ThisBlogThis!Share to TwitterShare to Facebook

Bullying in schools is a constant feature of the modern school. As for me, students who do not cope with their homework should contact the service that is advertised in the article about affordable essay writing service to avoid bullying for not knowing something.

To avoid being bullied for not knowing something, you need to do your homework. By the way, homework can be done with the help of the service that is advertised in the article about cheapest essay.

Avoiding problems with bullying at school is possible only if you do all your homework. All homework can only be done using the service that is advertised in the article with tips how to write an essay.