A nine-year-old girl was stopped by a security guard at the Tesco superstore at the Tower Park retail park in Poole, Dorset on Monday – because she had a balloon.

Her shocked mother, Marion Pearson, from Upton, said she was told by a security guard it was “company policy” not to allow helium-filled balloons.

She added: “How is a balloon going to harm anyone or anything in that store? It might make someone jump if it popped but other than that? I think it’s disgusting and Alex went away very upset because she couldn’t go in. It’s absolutely ridiculous.” 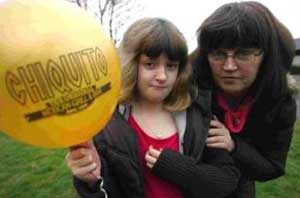 Marion, her elderly mother and daughter Alex, who has learning difficulties, had been for lunch at Tower Park restaurant Chiquito, where Alex was given the balloon. They went to Tesco at around 5pm.

A spokesman for the supermarket said: “A restaurant near the store was handing out helium balloons. Quite a number of children had come in and released them inadvertently or on purpose.

“Unfortunately they were getting trapped on the ceiling and blocking the sprinkler system, and they are pretty difficult to retrieve. The manager decided to use their discretion.” He added: “There is not a set policy on helium balloons at the store – it’s just common sense really.”
Posted by arbroath at 9:57 am
Email ThisBlogThis!Share to TwitterShare to Facebook

just ignore store security rent a cops. they have no more powers of arrest and detention than any other person does. they are powerless to do anything to you, you can make citizens arrest just as easily.