From biyanaam, or songs sung at a wedding, to joron, a ceremony to present ornaments, dresses and vermilion to the bride ahead of a marriage, the event was marked by all the customs associated with a typical Assamese wedding. And it was witnessed by the residents of the Hengerabari locality from Wednesday till Friday night. The nuptial knot was tied at 11 p.m. on Friday.

However, the bride, Bijuli, and the groom, Barun, were not human beings but two frogs. They were caught and brought here from the Tihu area of lower Assam’s Nalbari district to perform a symbolic marriage to invoke the rain-god as a dry spell over the past couple of months has hit the city and most parts of the State.

After the event, the couple were released into a nearby stream, along with two stand-by couples. A male toad brought with them, however, did not survive the ceremonies. 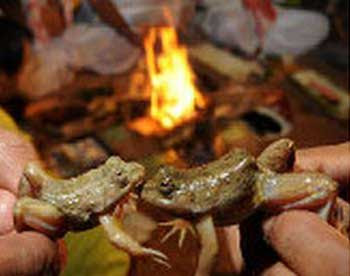 Barun was kept at the residence of his adopted parents — Deven Sarma and Anjali Devi. Joron was performed at the home of Chalodhar Kalita and Mala Kalita — the adopted parents of Bijuli. The wedding took place at a pandal erected on the premises of the Parbati Mahila Samiti.

“It’s a traditional belief that when a frog marriage is performed, the Barun Devata [the rain-god] is pleased and the rain comes. Since there has been no rain for the past couple of months we have performed the frog marriage to invoke the Barun Devata,” said Bijoy Das, a former councillor of the Guwahati Municipal Corporation.

In the absence of rain the city and several parts of Assam have been dry and dusty. The rainfall in Assam and Meghalaya for the season up to March 11 was only 2.2 mm against normal figure of 21.3 mm, according to data posted on the website of the Regional Meteorological Centre, Guwahati.
Posted by arbroath at 9:43 am
Email ThisBlogThis!Share to TwitterShare to Facebook