The Pope has reignited the controversy over the Catholic church's stance on condom use as he made his first trip to Africa.

The pontiff said condoms were not the answer to the continent's fight against HIV and Aids and could make the problem worse.

Benedict XVI made his comments as he flew to Cameroon for the first leg of a six-day trip that will also see him travelling to Angola. The timing of his remarks outraged health agencies trying to halt the spread of HIV and Aids in sub-Saharan Africa, where an estimated 22 million people are infected. 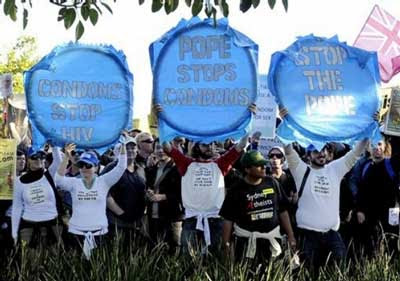 The Roman Catholic church encourages sexual abstinence and fidelity to prevent the disease from spreading, but it is a policy that has divided some clergy working with Aids patients.

Rebecca Hodes, of the Treatment Action Campaign in South Africa, said that if the Pope was serious about preventing new HIV infections he would focus on promoting wider access to condoms and spreading information about how best to use them."
Posted by arbroath at 9:39 am
Email ThisBlogThis!Share to TwitterShare to Facebook