Muslims who smoke and try to portray themselves as pious are worse than cows which defecate in the street, a top Malaysian Muslim cleric and politician said.

"...a cow which defecates in the middle of the road, (we) cannot take legal action against it because it has no brain and cannot think," said Nik Aziz who is the spiritual leader of the country's Pan-Islamic Party (PAS).

"But human beings, who have brains, for them to do something which is wrong in religion ... when they are in an attire which symbolises Islam, they can be regarded as being more despicable than cows," he said yesterday. 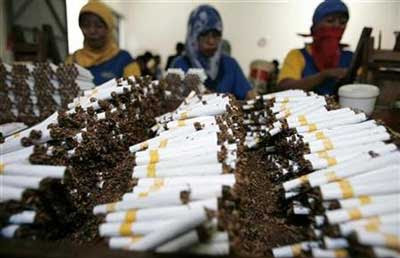 PAS is one of the three parties in Malaysia's opposition alliance led by former deputy prime minister Anwar Ibrahim. Nik Aziz said that smoking was forbidden by Islam.

Despite the ban in Malaysia, where over half the population of 27 million is Muslim, 50 percent of the male population smokes according to World Health Organisation (WHO) data.
Posted by arbroath at 9:58 am
Email ThisBlogThis!Share to TwitterShare to Facebook