The artist whose nude portraits of Brian Cowen, the Irish Prime Minister, caused a political furore after they were hung briefly in two of Dublin's most celebrated art galleries has handed the police a series of other satirical works featuring the nation's politicians.

Paddy Goodwin, the lawyer representing Conor Casby, a 35-year-old education specialist who has emerged as the guerrilla artist, said that his client was looking forward to a day in court, should charges be brought. 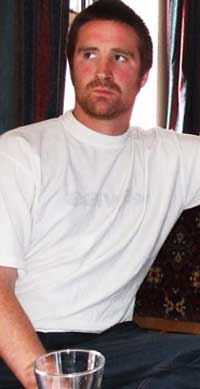 Mr Casby was unable to speak about this week's extraordinary events until a police investigation was over, he said. He did reveal that after voluntarily going to a police station to be interviewed in connection with possible offences of incitement to hatred, indecency and criminal damage, he had handed over five more paintings to detectives.

His two nude paintings of the Taoiseach were sneaked on to the walls of the National Gallery of Ireland and the Royal Hibernian Academy last week before they were removed by security staff. 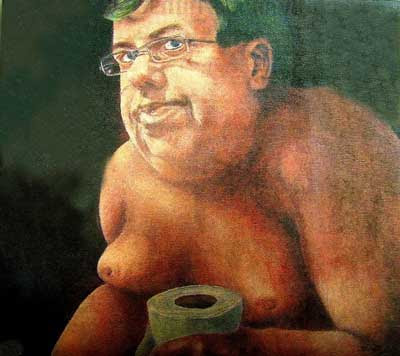 One showed a naked Mr Cowen, better known by his nickname Biffo, which stands for “Big Ignorant F****r from Offaly”, on a lavatory holding a toilet roll; the other displayed the Taoiseach holding a pair of Y-fronts.

The other works that Mr Casby gave to detectives are said to be in similar vein and feature Bertie Ahern, Mr Cowen's predecessor, and Michael McDowell, the former Justice Minister. It also emerged that, in spite of his denial, the artist did hang the paintings himself. A source at the National Gallery said that cameras caught Mr Casby in the act.
Posted by arbroath at 9:49 am
Email ThisBlogThis!Share to TwitterShare to Facebook