When James Brewer suffered a stroke and realised he was dying, the church-going Oklahoma factory worker decided it was time for an extraordinary death-bed confession.

Local police were summoned to his hospital bedside where he lay after suffering a stroke.

Brewer is alleged to have then told them he shot dead a man he believed was trying to seduce his wife more than 30 years ago. 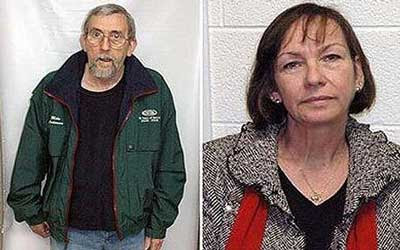 Detectives said Brewer, 58, told them he wanted to "cleanse his soul" and go to meet his maker with a clear conscience.

But in a bizarre twist of fate, Brewer survived the illness and now faces a new murder trial over the 32-year-old death of Jimmy Carroll in Tennessee - where the death penalty may await him.

Last week, a newly recovered Brewer and his wife, Dorothy, sold all their possessions in a garage sale and left their modest wood-framed home in Shawnee, Oklahoma, where they had reportedly been living under the assumed names of Michael and Dorothy Anderson. They drove to Hohenwald, Tennessee, where he surrendered to the authorities.
Posted by arbroath at 10:17 am
Email ThisBlogThis!Share to TwitterShare to Facebook