He has written more than 200,000 - yes, 200,000 - books to date, but yesterday marked a first for Professor Philip M Parker, who picked up the Diagram prize for the Oddest Book Title of the Year for his enticing The 2009-2014 World Outlook for 60-Milligram Containers of Fromage Frais.

The book is a worthy winner, beating off competition from Baboon Metaphysics, Curbside Consultation of the Colon and The Large Sieve and its Applications to take the prize, but Parker, who has described himself as "the most published author in the history of the planet", might just as easily have been nominated for his vast library of other books. If they had the necessary disposable income, who could resist the niche appeal of The 2007-2012 Outlook for Lemon-Flavoured Bottled Water in Japan, a snip at $495, or The 2007 Import and Export Market for Household Refrigerators in Czech Republic (just $112)?

Parker, a professor of management science at French business school Insead, achieves his prolific authorship thanks to his invention - and patenting - of a machine which writes books, creating them from internet and database searches in order to eliminate or substantially reduce "the costs associated with human labour, such as authors, editors, graphic artists, data analysts, translators, distributors and marketing personnel". 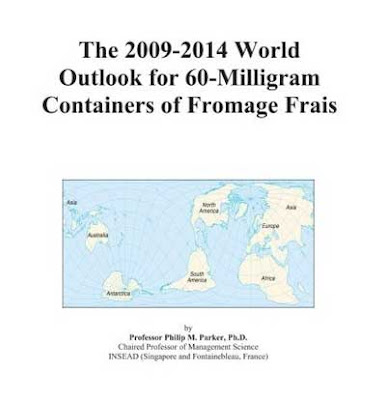 The Bookseller magazine, which runs the Diagram prize, said that Parker had not, as yet, responded to its attempts to contact him to inform him of his triumph. "It's an undoubtedly odd title," said Philip Stone, charts editor and awards administrator at the Bookseller. "I think it's slightly controversial as it was written by a computer, but given the number of celebrity memoirs out there that are ghostwritten, I don't think it's too strange."

The book highlights, he said, "an area that perhaps we are all guilty of ignoring as we push our trolleys down supermarket aisles. What does the future hold for these items? Well, given that fromage frais normally comes in 60-gram containers, not 60-milligram, one would assume that the world outlook for 0.06-gram containers of fromage frais is pretty bleak. But I'm not willing to pay $795 to find out."

Parker's title garnered 32% of the total public vote for the prize, well ahead of the second-placed Baboon Metaphysics, which took 22%. The other contenders were Strip and Knit with Style, and Techniques for Corrosion Monitoring.
Posted by arbroath at 9:43 am
Email ThisBlogThis!Share to TwitterShare to Facebook