A woman in Northern Ireland says her home has been over-run by grey squirrels. Oonagh Nutt, from Moira in County Down, says the animals first came into her garden from an adjoining park six years ago, but in the last 18 months they got too close for comfort.

"I thought it was lovely, I called one of them Hazel but then the next thing they'd got into the house," she said.

Mrs Nutt says the squirrels have caused serious damage: "They chewed their way through my roof in several places, they tunnel through the cavity walls, they live under the floor boards, they go to the toilet in the attic. 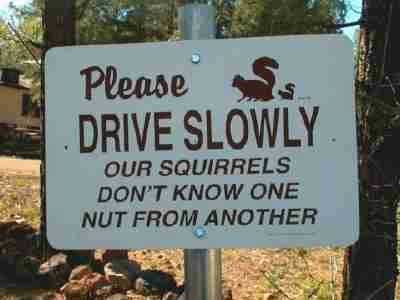 "Up close they are quite frightening - they look like puppy dogs with big hands, they growl and bark at you, they're vicious things. They'll go for you. I have a small child in the house and regularly at night the scratching and chewing and moving about will wake him up."

Mrs Nutt says she's spent thousands of pounds trying to tackle the problem. "I've had pest control round putting poison down in the roof space and travel routes through the house. But then they died inside the cavity walls and the house is infested with flies. It's a nightmare. We've had squirrel catchers, traps, lights, sonar. Everything but the kitchen sink."

Mrs Nutt is unhappy with the attitude of her local council to the pest problem. "I rang Lisburn City Council three times and have been told in short to go away. They say they're not a pest so there's nothing they can do."

With news audio.
Posted by arbroath at 10:12 am
Email ThisBlogThis!Share to TwitterShare to Facebook