Spotty teenager Sam Cummings has been nicknamed Craphead Slaphead because his acne spells out the word A-R-S-E.

The unfortunate 16-year-old, from Berkshire, says he has suffered from the spotty skin condition for years and has always had to put up with remarks about his blemishes from cruel classmates.

But things took a turn for the worse for the Titherton Secondary schoolboy when he woke up one morning last week and found his out of control zits had merged - and formed the word arse. 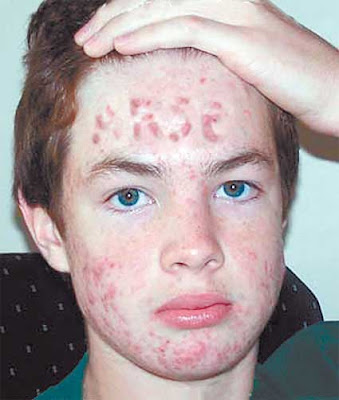 He said: “I’ve always had bad skin and didn’t think things could get any worse, but obviously I was wrong. I was horrified when I walked into the bathroom the other day and looked in the mirror.

“I literally did a double-take when I noticed my spots formed a-r-s-e and I tried everything to get them off.”

But sadly for Sam, his attempts to squeeze his spots into submission and cover them with his mum’s concealer were in vain.
Posted by arbroath at 9:18 am
Email ThisBlogThis!Share to TwitterShare to Facebook

i feel ur pain kid. i had people get on me for acne but fuk em. stay strong and remember u stronger than that and it will be gone soon. its hard but life is hard

...yeah...I'm sorry for the bullying and all, but that's not any old acne; the fact that it spells Arse is f*ckin' hilarious!

And that's what emo fringes are for!

I'm not having this! There's no way on this earth that the law of averages would happen to form acne into the word "ARSE". And in so precise spacing and in a straight line? What utter twoddle!

Aye amazing wat wee arises with no lives will do; on Photoshop for attention lol

Arses I meant stupid auto correct does my tits in!!!!

Very nice, this boy is so cute actually ^^

Stay strong dude. its easy for people to laugh at stuff like this. its harder to keep your chin up and stand firm. you will be the stronger man. anyone who ribs you for it can rot. karma will see to them.

Thanks for sharing such beautiful information with us. I hope you will share some more information about pimples.Please keep sharing.
Health Is A Life