It's one of those truly remarkable stories. A pilot in Florida dies in-flight and a passenger takes the controls. But the person who talked that passenger through the landing did so, over the phone, from his Connecticut home.

Rescue personnel surround the tarmac after a plane making an emergency landing. It happened Easter Sunday in Fort Meyers, Florida. The pilot died mid-air and a passenger had to jump in and take over. 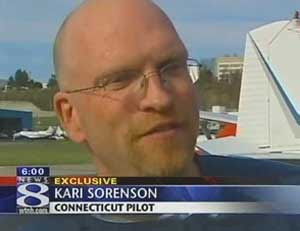 The air traffic controller, in Florida, had to talk him in but wasn't familiar with the aircraft. So, he called his friend Kari Sorenson in Danbury to help out. "The passenger that was flying the airplane, I was curious how stable he was able to maintain the airplane," said Sorenson.

Sorenson, a pilot for 24-years, as well as an instructor has flown the King Air many times. Using nothing but his cell phone he began to take the passenger through the landing checklist. The passenger did have some experience, but had never flown something as big as a King Air; Kari talked him right through the approach into the landing.

Sorenson said from the moment that the aircraft controller hung up with him, to the time he called back, seemed like an eternity. All of the things that could go wrong went through his mind. Then the call came in that they were safe and sound. "There was a long delay in the process from when he actually touched the runway to when I received the call that everybody is safe," said Sorenson.

With news video.
Posted by arbroath at 10:07 am
Email ThisBlogThis!Share to TwitterShare to Facebook