Police found an 8-month-old puppy — its feet, snout and tail bound in clear packing tape, a plastic bag and elastic hair ties — stuck to the side of a refrigerator in a Boulder home on Tuesday morning, the apparent victim of a domestic dispute between its owner and his girlfriend.

Abby Toll, 20, was arrested on suspicion of felony animal cruelty after telling police she taped the puppy, a shiba inu named Rex, to the fridge because she was angry at her boyfriend for not getting rid of his pet after it had bitten her.

“There’s a dog taped to the fridge,” she reportedly told an officer who responded to a call about a domestic incident at the apartment in the 2900 block of East Aurora Avenue around 5 a.m. Tuesday. “I know this looks bad. We were going to get rid of him anyway. We usually don’t do this.” 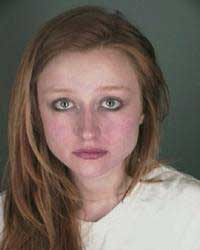 The dog, which police said in a report appeared to be in severe pain after being released from its “tomb of tape,” was placed with the Humane Society of Boulder Valley for safekeeping.

CEO Lisa Pedersen said that Rex was doing fine and the Humane Society would take care of him until the legal case is resolved. She said the dog may be placed for adoption at that point.

Toll, a University of Colorado sophomore majoring in environmental design, faces felony charges of animal cruelty and domestic violence, plus misdemeanor charges of criminal tampering and third-degree assault. She was being held at Boulder County Jail in lieu of a $12,500 bond.
Posted by arbroath at 10:18 am
Email ThisBlogThis!Share to TwitterShare to Facebook