A tourist who killed a man with a banjo after he received unwanted sexual advances has been found guilty of manslaughter in New Zealand.

Ferdinand Ambach, a Hungarian tourist, was drinking with Ronald James Brown on December 7, 2007 in a suburban Auckland bar before they went to Mr Brown's flat.

A violent argument erupted and Mr Brown, 69, was bashed repeatedly with a banjo before the neck of the instrument was rammed down his throat. He died in hospital three days later after his life support system was switched off. 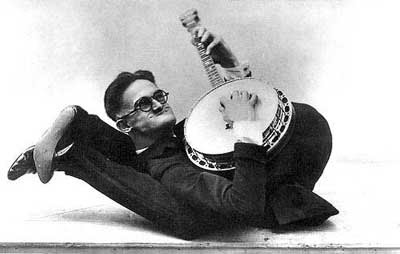 The defence case was that the 31-year-old accused was provoked by two unwanted sexual advances by Mr Brown and that the effects his drink being spiked caused him to act in an involuntary way where he wasn't in control of his actions.

The Crown said Mr Brown was struck five times before Ambach rammed the broken-off neck of the banjo down his throat.

When police arrived at the scene, they found Mr Brown badly injured and Ambach throwing furniture through an upstairs window and on to the lawn, while yelling in Hungarian.
Posted by arbroath at 9:41 am
Email ThisBlogThis!Share to TwitterShare to Facebook