Nearly 2,000 people have signed a petition seeking to prevent the removal of a tree stump on the grounds of a Co Limerick church, which they believe depicts an image of the Blessed Virgin.

Scores of people from across the country gathered to say prayers at Holy Mary Parish Church in Rathkeale yesterday where workmen made the discovery while cutting down trees earlier this week. 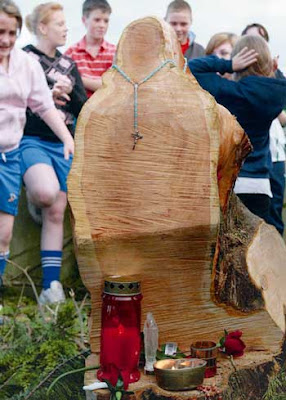 People from the town organised the petition in an effort to have the stump, which was due to be dug out of the ground yesterday, made into a permanent fixture at the church. “We have almost 2,000 signatures on the petition already and we are going to continue getting more,” said shopkeeper Séamus Hogan.

“People have been coming from Kerry and Clare to see this tree, which we believe shows a clear outline of Our Lady,” he continued. Mr Hogan said the discovery was bringing people from all walks of life to Rathkeale to pray.

“It’s doing no harm and it’s bringing people together from young and old to black and white, Protestant and Catholic, to say a few prayers, so what’s wrong with that? There’s enough violence and intolerance going on in the world,” he said.

Local parish priest Fr Willie Russell said that people should not worship the tree. “There’s nothing there . . . it’s just a tree . . . you can’t worship a tree.”
Posted by arbroath at 9:37 am
Email ThisBlogThis!Share to TwitterShare to Facebook