A cat owner only realised her ginger Tom was missing when a friend rang to say she had just seen him - live on television. Tango appeared on screen on BBC1's Question Time as David Dimbleby, politicians and pundits discussed topics as diverse as the wearing of burkhas, the situation in Iran and MP's expenses. 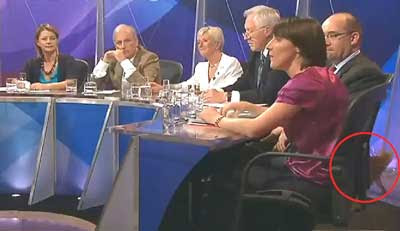 As recording was underway Tango crept in through a back door, ducked under a television mixing desk and made his way under the assembled seating. Guests included Jim Knight, Minister for employment and welfare reform, Pauline Neville-Jones, Conservative shadow security minister, and Kelvin MacKenzie, former editor of The Sun.

Tango appeared on set strolling around the back of the panel unnoticed or ignored by all except local Liberal Democrat MP Julia Goldsworthy. A stage manager then grabbed the cat and returned him to the outdoors.

Ms Ellery, a mother-of-two who works in the school canteen and lives nearby, was watching Question Time from the comfort of her living room when the one-year-old tom appeared on screen. "My friend phoned me up to say have you seen your cat on the telly", she said. "I'd been doing something else at the time but rewound it and there he was.

"It's lovely - he's a mischievous cat anyway and because we live so close to the school he's often in school grounds. The sixth formers know him really well. He must have known something was going on."
Posted by arbroath at 9:56 am
Email ThisBlogThis!Share to TwitterShare to Facebook