A quick-thinking 10-year-old drove a mobility scooter half a mile to rescue her stricken great-granddad after he suffered an angina attack. Kyra Young became concerned for 89-year-old Jack Atkinson after he failed to return home after taking his pet dog for a walk. Braving the pouring rain the concerned schoolgirl followed his known route until she found her great-granddad on a grass verge. She quickly got his keys to the 4mph Mayfair Freerider machine and ran back to his home for the buggy.

Kyra became worried about her great-granddad when he did not return from walking his West Highland terrier, Panyo. Kyra, who had been at Jack's house in Shinwell Crescent, Thornley, followed the route on which he normally takes the dog around nearby Cooper's Court and it was not long before she found him doubled up on a grass verge. 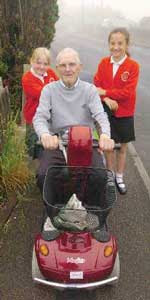 Wasting no time, she ran back to his home and got his electric mobility scooter, which does not require a driving licence to use, and drove it that half a mile to where her great-granddad waited. Jack, who had a heart attack in 1999, said: "I am proud of her. I had an angina attack and she said 'give me your keys and I will go and get your buggy'. "I got a pain in the right side of my chest. I could not go any further."

Kyra's mum, Karen Allen, 47, of Ellerby Mews, Thornley, said: "I'm proud of her because I dread to think what would have happened to be truthful. "If he had been left he certainly could not have made his way home. He could not get home because of the hills." Jack, who had his spray inhaler with him, managed to drive the scooter home with Kyra, and her step sister Hannah Young, nine, running alongside.

There's a news video here.
Posted by arbroath at 10:01 am
Email ThisBlogThis!Share to TwitterShare to Facebook