Public asked to have its say on naked woman sculpture

Revised plans for a giant sculpture of a naked woman, which is to be carved into the Northumberland landscape, are to be put before the public. The "Goddess of the North" will be made from two million tonnes of earth from the Shotton mine, near Cramlington.

Northumberland Council blocked the opencast mine and 500m-long sculpture plan in 2006 amid 2,500 objections. But the Durham-based Banks Group successfully appealed to the government in November 2007. 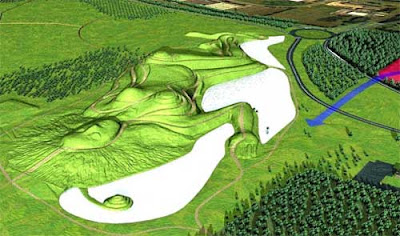 The sculpture, also knows as Northumberlandia, will lay at the entrance to a 60 acre (25 hectare) public park in south-east Northumberland. Designed by Charles Jencks, it will be almost 100ft (30m) high and be visible from the A1M. Tourism bosses in the county have welcomed the ambitious project.

But county councillor Wayne Daley, who has opposed plans for the sculpture and the associate opencast mine, said: "This structure will only come about after years of opencast mining. The project attracted one of the biggest oppositions to a planning application the council ever had. If we wanted something like this why didn't we just ask Jordan to open a theme park. It really is ridiculous to think that something like a naked woman, who is only there as a result of all of the slag and the coal from the mine, is a good way of attracting people to Cramlington."
Posted by arbroath at 10:07 am
Email ThisBlogThis!Share to TwitterShare to Facebook