A Belfast man is facing a series of restrictions - including a limit on the number of bicycles he has - under an Anti-Social Behaviour Order (ASBO).

Brendan Ross, from Dunraven Crescent, in east Belfast, had already been issued with an interim ASBO for collecting rubbish from council-owned recycling centres and civic amenity sites. It is believed that he travelled on a bicycle to collect the materials.

Following a request from Belfast City Council the ASBO has been issued for a period of two years. It was obtained following a conviction last month, after Mr Ross failed to comply with a previous court order to remove items from his garden, including discarded food that was becoming a public health hazard. 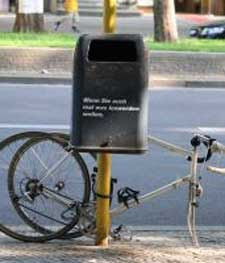 Mr Ross was fined £500 and Belfast City Council was awarded costs of £69 on that date. This week, a judge agreed to issue the 24-month ASBO with a number of prohibitions.

It prevents Mr Ross from storing items or materials in a way that is "likely to be prejudicial to public health or otherwise so as to cause alarm, harassment or distress to others".

He was also banned from collecting rubbish from private skips, bins or civic amenity or recycling sites, and is not permitted to have more than two bicycles in his possession at any one time.
Posted by arbroath at 9:34 am
Email ThisBlogThis!Share to TwitterShare to Facebook