A homeowner spent £150,000 on a clifftop house but just days later the garden collapsed in a massive rock fall.

The six-bedroom property was sold last week for the bargain price because of its precarious position overlooking Oddicombe Beach in Torquay, Devon.

But just six days later more than 5,000 tonnes of rock at the bottom of the garden collapsed into the beach below. 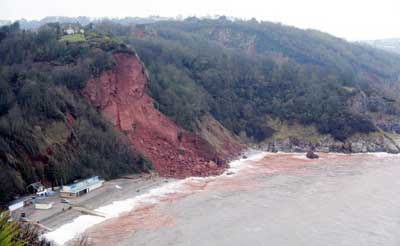 No-one was hurt but Ridgemont House lost a ''substantial'' chunk of its land and now sits just 50ft from the edge of the 300ft cliff.

It is understood to have been bought as a second home by a property developer from London named Sue Diamond, who paid a deposit with the sale to be finalised in March.

The new owner was said to be too upset to speak about the damage to her new property.
Posted by arbroath at 9:00 am
Email ThisBlogThis!Share to TwitterShare to Facebook