Matilda is a pet rat, and Alberta is a proud rat-free province, the only one in Canada. Recently, she moved to Calgary from Vancouver with her family, only to discover she was to be given a death sentence.

The family did not know that Alberta law does not allow for rats to be kept even as indoor pets. Instead of paying a $5,000 fine, they decided to give up the pet so it could be put down. 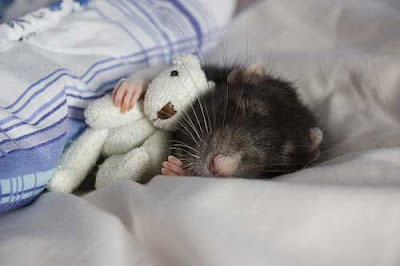 She was to be euthanized, but a rescue group came forward to fly her back to British Columbia, and save her life. Matilda flew out of Calgary on Friday.

"We had the ability to transport it at no cost to the taxpayer. It's a humane choice," said Bill Bruce, who is the director of Calgary's animal bylaw services.

With news video.
Posted by arbroath at 8:12 am
Email ThisBlogThis!Share to TwitterShare to Facebook

I dont believe for one minute that there isnt a single rat there.
Glad the pet rat was saves and that photo is adorable.
I miss my pet ratties :(

There are rats in Alberta, the gov just doesn't want to admit it. About two weeks before this article hit the papers, news of a dead rat found in a back-alley in Calgary was in the very same paper. We lived just across the border from Alberta for a few years and there were rats, they just seem to like to make the boast!!

That is the cutest picture ever!

I think Alberta is considered functionally rat-free. We don't generally have widespread breeding populations. Of course there will always rats in zoos, research facilities and pet rats. Calling Alberta rat-free is part of the public awareness campaign to help keep the rat population to a minimum in the rat-control zone, so they don't pop up everywhere.

If people think there shouldn't be rats here, when they see one, they call pest control. If people thought "oh, there are a few rats here" why would they bother calling someone if they see one hopping off a train or shipping container?

That's a picture of Bug the rat by Jessica Florence! More ratty adorableness can be found here: