For thirsty brewery workers, it was probably the worst ban in the world. Hundreds of Carlsberg employees walked out when managers removed their right to drink free beer during the day.

Lorry drivers also joined the lightning strike in sympathy even though their long-standing right to three bottles a day was not touched.

The workers said that they were demonstrating their anger at a lack of consultation before beer was removed from fridges around the plants at Fredericia in mainland Denmark and Høje Taastrup near Copenhagen. 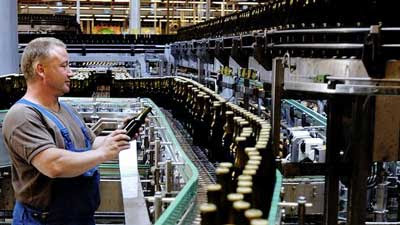 But Carlsberg insisted it would not reverse its decision to scrap the 163-year-old tradition that its workers could enjoy free beers throughout the day, imposing a new policy of drinking only at lunchtime.

Soft drinks are still available in the fridges and beer has now been provided on tap during lunchtime so workers can help themselves.

Drivers will retain their historical rights to take away three bottles at lunchtime but have to pass a breathalyser test linked to the ignition of their lorries to make sure that they are not over the limit.
Posted by arbroath at 7:06 am
Email ThisBlogThis!Share to TwitterShare to Facebook

They give their lorry drivers a few bottles of beer a day in between deliveries?
Daft.

WHAT!?!? How did I not know about this before the policy change? That would be my dream job.

This must be the only place in the world where it's not frowned upon to drink while working...

did loads of presentations & events for the (now called) AB Inbev company - the bunch who started out making Stella Artois, but now own half of the beer companies worldwide (they even own Budweiser.... danmn....) - well : at half past 10 in the morning, even board meetings, there's no coffee.... but.... you know what! (though it's been couple of years ago i worked for them - these days they're only in it for the money - prob no more beer indeed, all suits & bankers & money money money)

but i still do live half way between the Leuven Stella brewery & the Hoegaarden brewery ! yum ! it's a good life....

Oh you Bastard--- Some guys have all the luck- I have to ride at least 2 hours to get to Stella....

Yet I still consider myself to be more of a Trappist Westvleteren (12) -man.

i don't consider myself thàt lucky : i would rather have lived near the Duvel brewery....