Britain’s oldest married swingers are celebrating 30 years of ”total and utter hedonism” and are stilling enjoying partner-swapping parties – aged in their 70s. Retired Ian and Jean Smith – dubbed the ‘King and Queen of the Swingers’ – have taken part in more than 300 ”wild” sex parties since the 1970s. The couple, who have eight grandchildren, say their appetite for ”no strings” sex has only increased with age.

But they credit their ”open relationship” and ”free and easy” attitude as the secret to a long and happy marriage. Dad-of-four Ian, 70, a former delivery driver, said: ”I admit we’re a little older than most ’swingers’, but we’re not over the hill quite yet. We love going out, meeting new people and, of course, getting to know those people intimately if the situation or opportunity arises. 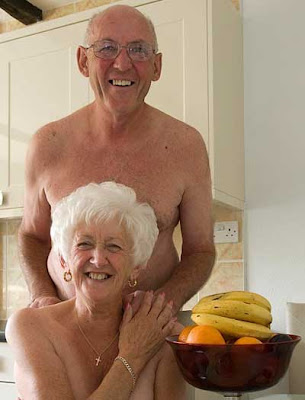 ”That’s why our relationship is so strong. We trust one other implicitly, but understand each other’s need for extra-marital encounters.” Jean, 75, a former dance teacher, added: ”Letting a counsellor into all the intimate details of your life is considered acceptable, but is far more damaging and intrusive than spending a few hours in the company of someone else.” The couple, from Buckhurst Hill, London, visited their first swinger’s party less than six months after they tied the knot.

Over the next 30 years, they became regular faces on the swinging circuit across London and Essex – often ”meeting” people half their age. Despite their age, Ian and Jean show no signs of slowing down and vow to continue swinging for as long as physically able. But Ian admitted: ”Our children know but they prefer to say nothing about it – I guess it doesn’t matter how old you get, you can still be embarrassed by mum and dad.”
Posted by arbroath at 8:02 am
Email ThisBlogThis!Share to TwitterShare to Facebook

To each his own, I guess.

I've heard just as many stories of "open marriages" turning into divorces, though.  It's obviously not for everyone.

perhaps they are  trying to bring back to life a  dying relationships , or one partner wants it to be open yet the other wants it closed

She looks like the lady from yesterday who got 1.5 million for taxes.

How does he know the children are even his?