An heiress has left her $8.3 million (£5 million) Miami Beach home and a $3 million trust fund to her three dogs. Gail Posner, daughter of the corporate takeover king Victor Posner, died aged 67 in March, but her three dogs continue to have full-time staff, wear £10,000 Cartier necklaces and enjoy weekly spa treatments.

However, Conchita, a chihuaha, and two other dogs called April Maria and Lucia, might have to scale back on the luxuries if Posner's only son, Bret Carr, a filmmaker, gets his way. He claims his mother was brainwashed into leaving so much of her fortune to her pets by her household staff, who were left a total of £20 million in her 2008 will. The document left him with just a £600,000 inheritance. In a lawsuit filed in Florida, he says his mother should have left the entire estate to him. 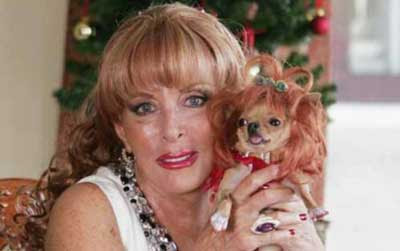 Mr Carr claims his mother's housekeeper and other personal aides drugged her with pain medication before getting her to change her will in favour of the dogs. Posner's housekeeper Elizabeth Beckford was told she would get £3m if she agreed to care for the three dogs at the mansion. Her daughter, an assistant housekeeper, received £600,000. Hernado Quintero, Posner's bodyguard, received £7m, Orion Sewell, a second bodyguard, got £5m and a personal trainer was bequeathed £1.3m.

But in court papers filed in Miami, Mr Carr claimed his mother was a "deeply disturbed" woman who was encouraged by her staff to buy diamond jewellery for her pets. He alleged the staff coerced her into leaving a huge inheritance to the dogs, over which they would get control.
Posted by arbroath at 8:07 am
Email ThisBlogThis!Share to TwitterShare to Facebook

It does sound a bit fishy...

Whoever wins this, I think the chihuaha's days may be numbered...