The Council for Scientific and Industrial Research (CSIR) has prepared patent formats of nearly 900 yoga asanas (postures), to prevent European and American companies involved in fitness-related activities from claiming them as their own. These asanas will all be included in the digitalised Traditional Knowledge Library (TKDL), set up by the council to collect and record traditional treatment therapy knowledge. Medicines and yoga asanas registered with it enjoy the status of being patented.

"Video recordings of the asanas are also being made and recorded to prevent them from being stolen," said TKDL director Dr VK Gupta. The CSIR began the project in 2006. These 900 asanas have been collected from Patanjali's classic work on yoga, as well as other ancient classics like the Bhagwat Gita. 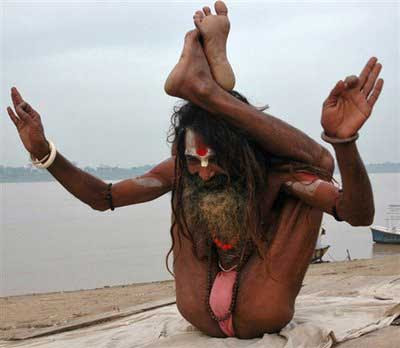 Gupta said a number of countries had already laid claim to around 250 of these postures. Some foreign companies have even patented some of them. Foreign companies have been selling some of the yoga postures as therapies to relieve stress or backaches. "How can someone else patent these asanas which are a part of our traditional treatment therapy knowledge? They should not be allowed to use them for commercial purposes," Dr Gupta said.

The CSIR's next step will be to move against the yoga patents already registered abroad. The United States patent office alone has issued around 3000 patents on yoga postures and their variations.
Posted by arbroath at 8:16 am
Email ThisBlogThis!Share to TwitterShare to Facebook

Give me a break.

I have this particular way of walking...

I agree that all fitness knowlege, regardless of origin is universal knowledge and therefore free.  Open source is the only way to further the development of the people in the universe.  Trying to patent religion would be just as foolish.  It is only through all adding to the Source of knowledge that Peace and Freedom will reign.
Elle at www.bodywindow.com