Most expensive feather ever fetches £4,000 at auction

A single plume from the extinct huia bird has sold for a record sum at auction in New Zealand making it the most expensive feather ever. The brown and white feather fetched NZ$8,000 (£3,800), far exceeding the NZ$500 that it had been estimated to reach. The feathers were traditionally used to adorn Maori chiefs.

The huia bird is thought to be extinct and has not been seen since 1907. The feather went under the hammer at Webb's Auction House in Auckland. Neil Campbell, the managing director of Webb's, said that the auction room had been "spellbound" as the bidding mounted. 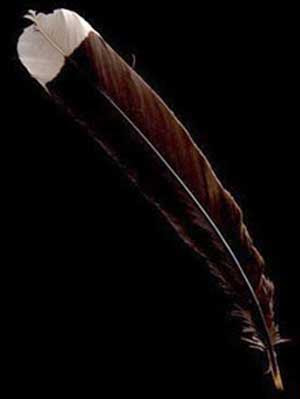 "Starting in $100 increments, that quickly leapt into the thousands and came to rest at a world record price (for a single feather) of $8400 ($6,787)". The huia feather was bought by a family from the city of Wellington who declined to be identified. A spokesman from Webb's said that the family own a large collection of Maori artefacts. It was sold by an unidentified vendor who had had the feather in his family for generations.

The feather that sold in Auckland had been verified as authentic by experts from New Zealand's national museum, Te Papa. The previous record price for a single feather was reached when one from a bald eagle sold at a US auction for $US2,800 (£1,900). Numbers of huia birds declined rapidly after predatory mammals were introduced into New Zealand in the 1890s. Populations also suffered from hunting and deforestation.
Posted by arbroath at 8:10 am
Email ThisBlogThis!Share to TwitterShare to Facebook