Woman lived in a hospital car park for 4 months

Company boss Lynsey Church drove to a hospital car park and lived in her car for four months after being crippled by panic attacks. Too scared to move, she slept in the motor there so she'd be near medics at all times. She ran her cleaning business from it using a laptop and mobile. Lynsey even tucked in to Christmas dinner in the black Renault after a heart scare sparked the attacks.

Lynsey, 30, said: "The thought of driving home was too terrifying. I knew I had to stay as it was the only place I felt safe." Medics couldn't section her either because she wasn't actually a danger to herself. Lynsey, from Wishaw, Lanarks, had her first panic attack in October last year when she was driving home from work. She recalled: "My heart started hammering in my chest. I pulled over and called 999." An ECG revealed it had been triggered by an ectopic heartbeat, or irregular heart rate. She was prescribed beta blockers to slow her heart but the attacks didn't stop. 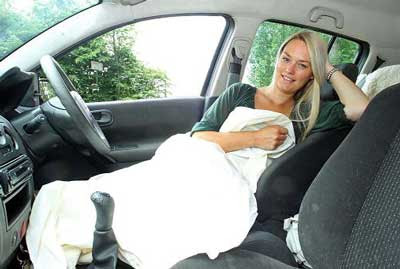 Terrified, Lynsey began stopping at all of the three hospitals she passed on her drive to and from work. Then one day in November last year she got to Wishaw General - three miles from home - and stayed put. Her boyfriend Scott Paterson couldn't get her to budge. And because she was awaiting therapy for her attacks, her GP could do no more. So Scott, 40, brought her a sleeping bag, food, money, and visited every day. Lynsey washed in the hospital and bought her grub in the canteen.

Even the winter couldn't shift her. "I'd wake up shivering," she said. "There was ice on the inside of the car. I was lonely but too frightened to go home." Lynsey's mum brought her Christmas dinner and Scott festooned his car with tinsel and brought her presents. The security guards and police checked on her but it wasn't until a worried paramedic got her a hospital appointment in March that she got treatment. Now back at home with retail manager Scott and undergoing weekly counselling sessions, Lynsey said: "I'm angry that I was ignored for so long. Mental illness is a real problem." An NHS Lanarkshire spokesman said: "An appropriate care plan is now in place."
Posted by arbroath at 8:00 am
Email ThisBlogThis!Share to TwitterShare to Facebook

That's appalling.  It's a good thing she didn't freeze to death, or the hospital would have some explaining to do!

This is rather attention seeking.