A US family who was told their daughter was killed in a car crash are "ecstatic" after learning she is alive following a medical mix-up. Abby Guerra's relatives were informed of her death last week - and had been planning her funeral when they found out the 19-year-old had in fact survived. An identification error by officials at the crash scene had led to the talented young football player being mistaken for 21-year-old Marlena Cantu.

But the "miracle" news meant heartache for Ms Cantu's family, whose daughter did die in the accident. The two were among five friends caught up in the crash when the 4x4 they were in suffered a rear tyre blow-out as they returned from a trip to Disneyland in Los Angeles. Ms Cantu's family even sat by Ms Guerra's hospital bedside in Phoenix thinking their own daughter was fighting for her life. 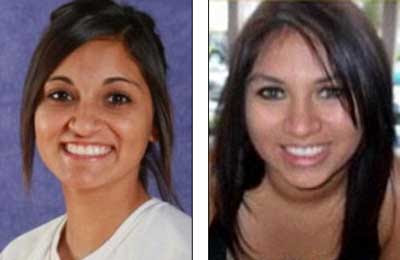 Unfortunately, Ms Cantu had already died. The injuries to Ms Guerra, from Glendale in Arizona, were so severe that it was difficult for anyone to recognise her. She had suffered severe head wounds, a broken back and punctured lung.

Her face was completely swollen, her eyes were blackened and her head was shaved for a brain operation. However, there were key differences between the two girls - including that Ms Cantu had a scar on her stomach, fewer ear piercings and was slightly taller than Ms Guerra. Officials had incorrectly identified Ms Guerra at the scene of the crash and informed her family of her death.

This was even though the medical examiner's office had reportedly refused to confirm her identity until they could compare her medical records. That process took nearly a week, with officials blaming a backlog of patients and shortage of doctors for the delay. Dental records helped make a positive identification because Ms Guerra did not have wisdom teeth while Ms Cantu did, said a friend of the 21-year-old, Colleen Donovan.

Ms Donovan never suspected there was a mix-up. She said: "You're not looking for differences. It didn't look like anyone I'd ever seen." Ms Guerra is in a critical condition. Her aunt, Dorenda Cisneros, said: "I mean, you're ecstatic for one. I mean, it's a miracle. But in the same you feel angry, because we mourned all week." She added: "It's a bad dream, and hopefully it's gonna have a great happy ending. That's what we're praying for." Another passenger Tyler Parker, 20, died in hospital following the crash.

Update: There's another news video here.
Posted by arbroath at 8:02 am
Email ThisBlogThis!Share to TwitterShare to Facebook