Two young children have been hailed heroes after saving their diabetic mother’s life – after feeding her their sweets. Quick-thinking Guy Hill, aged 10, and sister Olivia, three, leapt into action after mum Georgina fell into a diabetic coma. Georgina, 33, collapsed at home minutes after husband Aaron, 42, went to work leaving her with the two children. Guy found his mum slumped semi-conscious on her bed and with his toddler sister the pair began feeding her their sweets.

Because of her condition she kept trying to spit the sweets out but the two children forced them into her. They then poured sugar into her mouth and as her blood-sugar levels rose Guy used his mum’s mobile to ring his dad who called an ambulance. Georgina, of Exmouth, Devon, recovered and the couple say their two children are ”real heroes”. Aaron said: ”Guy was concerned that his mother had not got up so he sent Olivia upstairs to see if everything was all right. 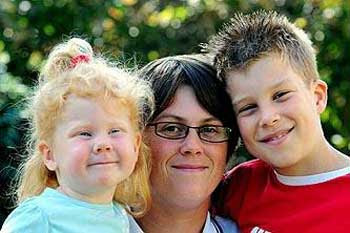 “She saw that her mother seemed unconscious and came back to tell her brother. He tried to call me but couldn’t get through. He then tried to get my wife to take some sweets to get her sugar levels up. She was in no fit state and kept spitting them out but they kept at it and together managed to get some into her. They are real heroes, lifesavers.” Guy said: “I managed to give her some sugar and Olivia helped too with sweets. I managed to find a phone to call Dad. I suppose we were with mum for about half an hour, I don’t really know how long.

“We stayed with her and managed to get her talking and to behave a little better but I was still pleased to see dad arrive.” Dr Adrian Midgley, the family’s GP, said Georgia could have died if the children hadn’t acted. He said: “Well done, Guy and Olivia. They did exactly the right thing. Children are very good at understanding such situations and it is well worth talking to them about such matters. If mum feels numb and vague, that is the time to act, get something sweet inside her.”
Posted by arbroath at 8:01 am
Email ThisBlogThis!Share to TwitterShare to Facebook