Trees could be cheap alternative to speed cameras

Trees could provide a cheap alternative to speed cameras after a pilot scheme found that they be used to encourage drivers to slow down. Motorists who travel down French-style avenues feel as though they are going faster and are more likely to slow down. More than 200 trees were planted on the approach roads to four rural villages in north Norfolk which had a history of speeding problems.

The experiment was carried out by Norfolk County Council at a cost of £70,000, funded by the Department for Transport. Provisional results found that drivers reduced their speed on the roads into Martham, Horstead, Mundesley and Overstrand by an average of two miles per hour. "It's a good result for what is a very cheap method," said Stuart Hallett, Norfolk's casualty reduction manager. 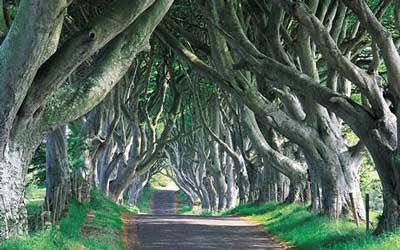 Norfolk Country Council had hoped to reduce speeds on the villages' approach roads by two to three miles per hour and to cut accidents by 20 per cent. By strategically planting trees along the roadside the driver's perception of speed can be altered. As the car approaches the village the trees are planted closer and closer together giving the impression that the vehicle is moving faster. This encourages the motorist to slow down. The trees were planted in March this year and are seen as a environmentally friendly alternative to unpopular speed bumps.

Road safety campaigners however, were concerned that the "green" approach to speed control would only affect the behaviour of conscientious drivers. Ellen Booth, campaigns officer for Brake, said: "Although this project is interesting and has some very good points it isn't a match for replacing speed cameras. It doesn't deal with enforcement and is unlikely to influence the driver who is deliberately speeding and only concerned about losing their licence. This type of project is likely to help with people who unintentionally creep above the speed limit. I would argue that speed cameras are much more cost effective and they bring in revenue for central government. They are a deterrent to all drivers rather than just a few."
Posted by arbroath at 8:02 am
Email ThisBlogThis!Share to TwitterShare to Facebook