A speedy getaway is usually critical for bank robbers, but perhaps not for an elderly British Columbia man who this week held up a bank - and while using a walker. While no weapon was produced, the 75-year-old told staff at a Prince George Bank of Nova Scotia that he was armed. Staff surrendered a small amount of cash and the robber made his getaway as RCMP were called at around 11:45 a.m. on Friday.

The suspect was described as a Caucasian male weighing about 230 pounds. He was wearing a straw hat, white T-shirt, grey jogging pants and dark glasses - and he was using a walker that many rely on for mobility. Prince George RCMP spokesman Gary Godwin said the man was apprehended approximately 45 minutes later in the same suburban strip mall where the bank is located. 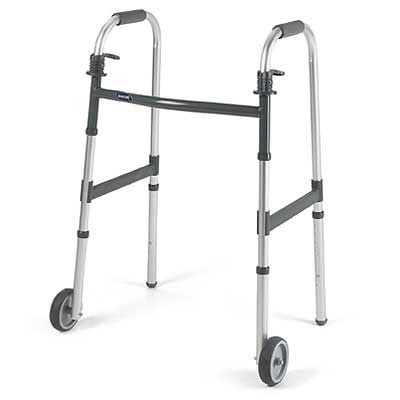 The man is in custody while police investigate the decidedly unusual case. “It’s not every day you get a 75-year-old male on a walker holding up a bank,” Godwin said. “We’re looking at all the circumstances that are involved.” He said the man is known to police. Godwin, who has just retired from the RCMP after 25 years and has 36 years of policing experience, has never seen as elderly a bank robber as in this case.

But he said staff did the right thing in allowing the man to leave the bank even though they never saw a weapon. “You never know what you have on the other side of the counter,” Godwin said. “If he says he has a weapon, the best thing is to give him what we wants. Err on the side of caution is what we teach.”
Posted by arbroath at 8:05 am
Email ThisBlogThis!Share to TwitterShare to Facebook