Zebras in custody after fleeing from home

A pair of zebras created problems in Sacramento County on Saturday evening.

Dispatchers received calls of a zebra on the loose in the area of Manzanita Avenue & Fair Oaks Boulevard around 7 p.m. Sacramento County Sheriff's deputies and animal control officers soon realized there were two animals running around the area. 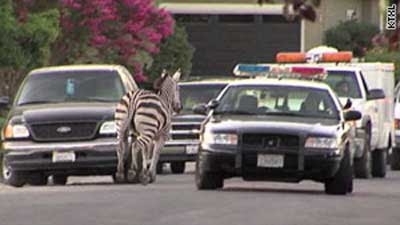 One of the animals evaded deputies and startled onlookers and motorists for about an hour. It was located inside a pool in an apartment complex on El Camino Avenue.

The second zebra was injured after it was struck by a car and located hours later. It is expected to be okay. The animals appear to have escaped from their owner's home where they are kept as pets.

Video.
Posted by arbroath at 8:06 am
Email ThisBlogThis!Share to TwitterShare to Facebook