A man in Ghana says he couldn’t believe his eyes the moment he unwrapped a snack and discovered a woman’s G-string stuffed inside.

Isaac Ato Nzeh, a 33-year-old professional cameraman, found the shocking surprise when he tried to prepare two Fanti kenkey he purchased a day earlier from a local food vendor. Fanti kenkey is a traditional Ghanian corn dumpling that is commonly sold in a ready-to-cook, raw form as fermented maize dough wrapped in plantain leaves. It’s usually served with a vegetable stew or soup. 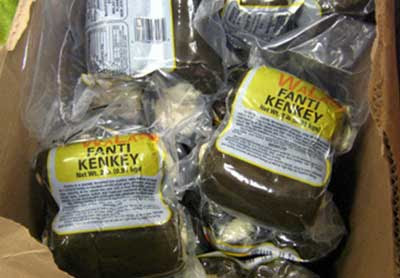 He says when he unwrapped the first ball of kenkey, he noticed a piece of fabric sticking out of the leaves of the second kenkey, but assumed it was a “rag” that accidentally got wrapped inside. But when he peeled away its leaves and saw provocative green-and-black panties “folded neatly” under the dough, he was stunned. He says it was the “shock of his life” and became so disturbed by the sight, he lost his appetite.

Since launching a complaint, a food administration board confiscated the panties and kenkey and are now investigating the matter. Some locals believe the mishap occurred “by mistake” because kenkey is commonly prepared by women at night, however others insist its significance could be a spiritual omen.
Posted by arbroath at 8:07 am
Email ThisBlogThis!Share to TwitterShare to Facebook