Police in a flood-hit region of China have been issued with stilts so they can go out on the beat.

Officers in Haikou, southern China, were struggling to go out on patrol after freak flash foods left streets under two feet of water. 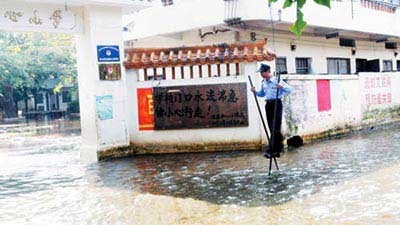 But one enterprising local policeman had the bright idea of putting his woodwork skills to good use.

Patrolman Li Keying explained: "We are only a country police force and there aren't many waders to go round so I started making stilts and they're very popular. You keep your feet dry and you can see over a lot of walls and hedges to things that would normally be hidden from you."
Posted by arbroath at 8:03 am
Email ThisBlogThis!Share to TwitterShare to Facebook