Tesco is hoping to rake in some extra pennies from heaven - after opening its latest branch in an old church. Biblical characters depicted in ornate stained glass windows now look down on shoppers browsing the aisles in the historic building near Bournemouth. But the conversion of the former Westbourne Methodist Church has divided opinion. 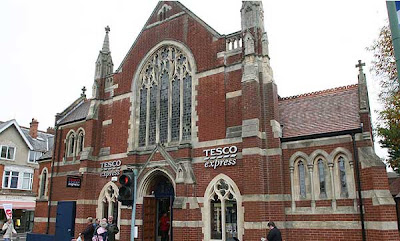 Christians opposing the scheme have highlighted a passage in the Bible detailing Jesus' efforts to rid the Temple of Herod, saying 'Get these out of here! Do not make My Father's house a house of merchandise'. A Tesco spokesman would not reveal whether the firm planned to target the increasing numbers of derelict churches across the UK for new branches. But he did say the Westbourne store was "proving to be extremely popular with our customers".

Permission for the shop was granted only after Bournemouth Council agreed to a 'change of use' application to allow a retail operation in the building. Sandra Jones, manager of the nearby Help The Aged charity store, said: "If the church could have been used for something else I would have been delighted but who else has the money to bring it up to scratch? "The building looks beautiful now and they've really cleaned it up, but it's just a shame it's Tesco." The Rev Dr Bob McKinley, ex-minister at the church, which had lain empty for three years, was also sad about the unusual conversion. He said: "You could say it is not appropriate to have a Tesco Express in a church but once it is sold it is no longer under our control."
Posted by arbroath at 8:02 am
Email ThisBlogThis!Share to TwitterShare to Facebook