A pensioner ran over his wife then crushed himself to death against a wall rushing to her aid. Tony Murphy, 78, was backing out of the driveway when his car suddenly lurched and knocked over his wife Fay.

Tony tried to climb out of the car but accidentally stood on the accelerator causing the automatic Ford Focus to shoot forward and crush him between the car and a wall. Devastated Fay, 76, of Spalding, Lincs, who suffered severely bruised legs, said: "He was my carer from the day we married. I miss him terribly. He was popular with all the darts teams he played with and everyone around here." 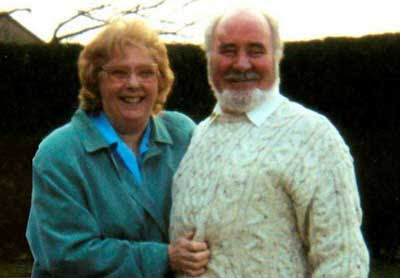 The couple had been married for 56 years before the tragic accident on October 27. When they met Tony, a retired builder, nursed Fay through tuberculosis and in recent years helped her live with crippling arthritis.

Fay's brother Geoffrey Bagnall, 61, said: "He normally reverses out very slowly, but he came out fast and knocked her down and ran over her left leg. Tony was hanging half out of the car. He realised what had happened but his left leg and left hand were still inside. He must have gone for the brake but missed and got the accelerator because the car shot forward. As the car went forward it left six inches between the wall and it crushed his chest. It was a freak accident."
Posted by arbroath at 8:00 am
Email ThisBlogThis!Share to TwitterShare to Facebook