25st man can't give blood in case he breaks the bed

A gentle giant has condemned the NHS after they refused to take his blood under health and safety rules because — he is to big. Jamie Knight, 20, has donated blood for three years without any problems since his grandmother received a life-saving transfusion.

But the 6ft 9ins man mountain was stunned when nurses turned him away from a clinic claiming they could not guarantee the beds would support his well-built frame. Jamie, who weighs around 25 stone, even offered to bring in own blow-up bed or lie on the floor – but the blood nurses refused to budge. He said: ”I am probably a little bit heavier than I ought to be, but I am a very big bloke. I am not massively overweight for my height. 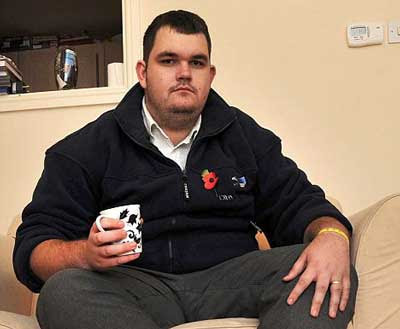 ”All I want to do is give blood. I have given at least six pints in the past and have never had a problem. But last week they sat me down and said if I could not assure them I was under 25-stone, then I could not give blood. They were worried the bed would not take my weight. I said I had not weighed myself, so could not guarantee it.

”I told them I was prepared to do it whatever the consequences – at my own risk – but they weren’t having it. I was gutted – especially as they are always appealing for people to give blood. I called the helpline to see if there was a bigger bed anywhere in the country where I could go – but I was told there was nowhere they were aware of.”
Posted by arbroath at 8:01 am
Email ThisBlogThis!Share to TwitterShare to Facebook