A man swiped almost £150,000 on a flight in the Caribbean after sneaking into the cash-laden cargo hold via the lavatory, police said on Thursday. The mid-air theft took place on an Air Antilles flight from the French island of Guadeloupe to the Franco-Dutch island of Saint Martin, which was carrying a total of 1.2 million euros on behalf of Brink’s Security Company.

Pretending to be ill, the man spent the majority of the 40 minute flight in the lavatory, where he succeeded in removing several wall panels to gain access to the hold in the rear of the plane. It wasn’t until the plane landed that it was discovered that 172,000 euros (£148,000) were missing from the cargo. 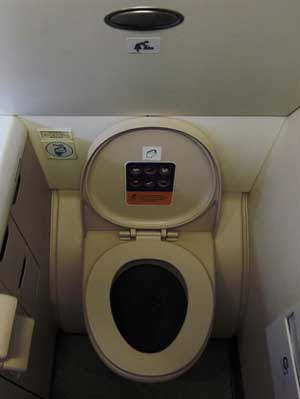 Shortly before landing, the unnamed man – who was travelling with a woman – asked a hostess for an ambulance to meet him on the tarmac, witnesses said. When the ambulance arrived, the man said he felt suddenly better and walked out of the airport without having to go through the normal security checks. Police have been unable to trace him.

The alarm was raised when cleaners discovered bundles of notes in the lavatory cubicle, and police questioned the woman in the baggage arrival hall. She claimed she did not know the whereabouts of the money, which is still missing. Her companion has been identified as a French national living in Guadeloupe, but has still not been found by police. The search continues.
Posted by arbroath at 5:06 am
Email ThisBlogThis!Share to TwitterShare to Facebook