Man claims God sent him to smash up house

A West Hartford man with a history of bizarre and threatening behaviour was arrested this week in Farmington after he allegedly broke into a house, smashed statues and a marble table with a fireplace poker, then told the homeowners as they arrived home that he'd been sent by God, police said.

Levon T. Sarkisyan, 27, of Eustace Drive, West Hartford, was charged with third-degree burglary and first-degree criminal mischief and was initially held by Farmington police with bail set at $50,000. He was released on a promise to appear in court after his arraignment Monday at Superior Court in Hartford. 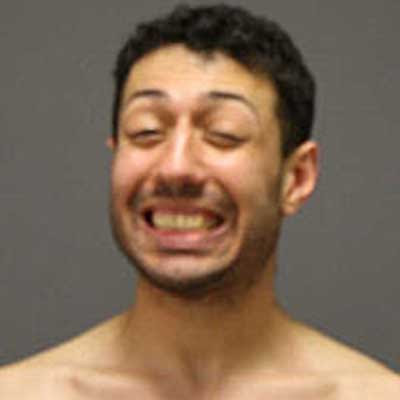 The homeowner told Sarkisyan to sit down, then fumbled with a phone trying to call 911, Egan said. Sarkisyan said, "You see, God will not let you use the phone," Egan said. As they waited for police, the homeowner asked Sarkisyan how he broke into the home. Sarkisyan then stood up, "flexed his arm and said, 'You see, super-human strength,' " Egan said. Officers arrived moments later and took him into custody without incident. Later, Sarkisyan told officers he'd smoked "a strange strand of herb" that caused him to do what he did, Egan said.
Posted by arbroath at 6:07 am
Email ThisBlogThis!Share to TwitterShare to Facebook